You Are Here: 5 Questions: Test Engineering 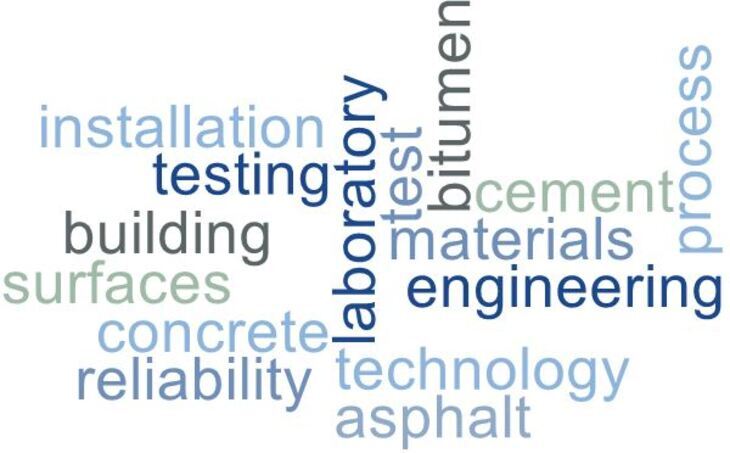 Which materials does laboratory testing technology deal with in detail?

Road construction is of central importance for society as well as for the economy, as the road plays the central role as a connection and transport route. Basically, there are two types of roadways: those made of asphalt and those made of concrete. Asphalts contain bitumen, while concrete consists of a mixture of cement and rock.

The focus of research at ISAC is on bitumen; in parallel, interdisciplinary collaborations are underway to analyze and optimize cement and aggregates and their mixture. In our certified materials testing laboratory, we carry out tests on the individual components bitumen and cement as well as on the construction materials asphalt and concrete. In the case of asphalt, we concentrate in particular on deformation behavior, fatigue behavior and compaction behavior. For concrete pavements (here continuously reinforced concrete pavements), the focus is on the life cycle.

Another factor that also affects construction materials is climate. Road infrastructures have to be substantially adapted to climatic changes in order to reduce negative consequences and to secure the existence of roads. First, temperatures are increasingly rising. Second, precipitation is increasingly occurring as singular events, such as thunderstorms with heavy rain. Due to the high degree of surface sealing in inner cities, heat accumulates, creating so-called heated islands. In addition, the large amounts of water from precipitation cannot percolate to a sufficient extent, which leads to overloading of the sewage system and flooding of the streets. Civil engineering must also respond to these changes. One starting point is the development of water-permeable road surfaces that also counteract the effects of heat, such as PU asphalt.

What are the main areas of research in paving technology?

The focal points in paving technology are firstly digitization, secondly automation, and thirdly optimization of paving processes. The aim of the research is to make construction processes reliable. Frequent sources of error are found in the coordination between machines and people, for example between the paver and the operator. This is where ISAC comes in, with the approach of digitizing and automating manufacturing processes and ultimately optimizing communication between man, machine and machine.

Once the asphalt surface has been produced, changes or improvements, the elimination of defects, are extremely costly; in the worst case, even a complete new construction is required. To ensure the quality and to improve it if it should be insufficient, the standard process of a construction sequence certainly provides for possibilities, but such interventions are comparatively rare. A particular challenge in any construction process is the measurement of quality, for example with regard to evenness and compaction. Another challenge lies in the homogeneity of the surface, since the entire construction field must have a uniform quality - regardless of its area.

Under which aspects are surfaces examined?

The term surface refers to the surface course, the top layer of a road. This surface is in constant interaction with the road user, be it truck, car, bicycle or roller skates. All of these users place demands on the road surface, some of which overlap, but some of which can be very different.

In general, a road should take into account its environmental conditions. In Germany and northern Europe in general, for example, it should have a light-colored surface so that it remains easily visible in the dark or in bad weather. Skid resistance, popularly known as "the grip," is essential for short braking distances. In addition, evenness of the road surface is elementary for various reasons. An uneven road has a negative effect on ride comfort in the vehicle and can damage the back in the long term, it also puts stress on the axle and body of the vehicle and has an effect on the load/cargo. Uneven surfaces also place stress on the road, e.g. additional dynamic axle loads occur in the case of dips.

In addition, the surface also influences the acoustics. Choosing an appropriate road surface can significantly reduce noise pollution around roads that are traveled at high speeds.

In which areas are there intersections with the other disciplines of tunnel engineering and traffic engineering?

In surface research, civil engineering has a significant intersection with tunnel engineering. Since there is no daylight in tunnels, a light-colored road surface can be used to reduce lighting requirements. Consideration has also been given to using modified road surfaces to reduce nitrogen oxides in tunnels. However, since such methods are not currently conceivable without sunlight, implementation will probably take some time.

With a view to the digitalization of traffic, civil engineering is also making a significant contribution to traffic technology. This applies, for example, to the detection of vehicles, either by means of sensors in the pavement structure or on the basis of sensor-capable road surfaces. Targeted traffic control reduces the stress on roads and extends their durability. Visual methods from traffic engineering, for example, to capture the condition of roads derived from vehicle data, enables the design of a map that provides information on the stress on road structures. Conversely, the finite element method from civil engineering, provides the option to simulate stresses in advance.

What makes research in the field of Test Engineering particularly exciting?

The attraction of experimental engineering lies in the constant confrontation with new challenges. One of the reasons for this is the ever-increasing demands placed on a roadway. At the beginning, for example, we were faced with the problem that vehicles were getting faster and faster and the road surfaces needed more grip accordingly. Today, the focus is more on the acoustic properties, the reason being the increasing traffic and the increasing density of the residential structure. Another important aspect is the digitalization of traffic, in which construction technology also plays a significant role. In addition, the unsealing of surfaces in the municipal sector is a key issue: on the one hand, there is a need to respond to the increasing heavy rainfall events, and on the other hand, evaporation processes can also be used to cool down overheated inner cities. In addition, rain can be used to recharge groundwater.

Road surfaces should be water permeable in the future in municipal areas, but drip losses and tire abrasion from vehicles should not enter groundwater. Therefore, options for filtration must be considered, whether direct filtration or deeper filter layers.

What makes Road Construction Technology - and especially Test Engineering - so exciting is the combination of a traditional trade with current issues and ever-changing challenges. And ... in the end it is always a great pleasure to see and experience the result in reality!