You Are Here: Adhesion

Multiscale Modelling and Characterization of Adhesion between Bitumen and Aggregate

The objective of this project is to create fundamental knowledge of adhesion property between bitumen and aggregate at multi scales. For this purpose, the rolling bottle tests are conducted to evaluate the adhesion performance between specified bitumen and aggregate and screen the major influence factors. The conventional contact angle test is to be improved by measuring the contact angles of bitumen on aggregate plates of varying surface roughness. The impact of aggregate surface morphology on bitumen-aggregate interfacial adhesive energy can thus be identified. Meanwhile, the Thin Layer Chromatography (TLC) test and XRD test are to be conducted to analyse the four fractions of bitumen and mineral compositions of aggregates, respectively. On that basis the molecular models of bitumen-aggregate interface (with / without moisture) will be established.

In the other step, a strength-based evaluation method on adhesion property between bitumen and aggregate will be proposed based on the Dynamic Shear Rheometer (DSR) platform. This new test procedure is achieved by replacing the parallel steel plates with aggregate plates to create a bitumen-aggregate interface, and its load pattern is analogical to the pull-off test. Based on that, the effects of chemistry of materials, morphology of interface, as well as loading conditions on bonding strength between bitumen and aggregate will be carefully investigated. The viscoelastic CZM will be adopted to describe the interfacial debonding behaviour and its parameters can be identified through the tests.

Lastly, the previously obtained interfacial adhesive energy-based and bonding strength-based failure criterions will be incorporated into the micromechanical and FEM models, respectively. The established damage models pave the way for bridging the fundamental understandings of adhesion property between bitumen and aggregate at the microscale to the performance at the macroscale. 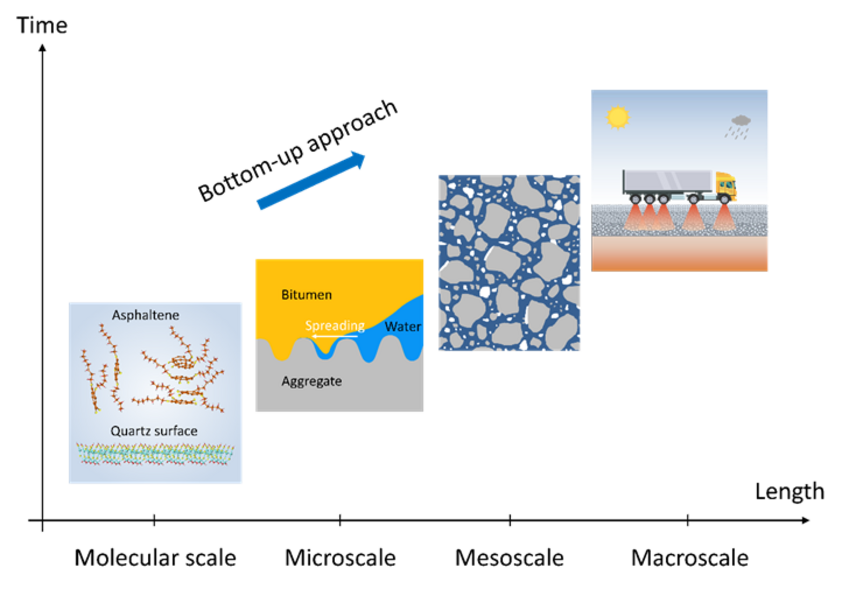 Copyright: © ISAC Schematic of multiscale approach for adhesion property between bitumen and aggregate